Meet Dr. Erin Stokes, a UL Lafayette graduate who expanded her education leadership skills in the Ed.D. program with a cohort of students from central Louisiana. 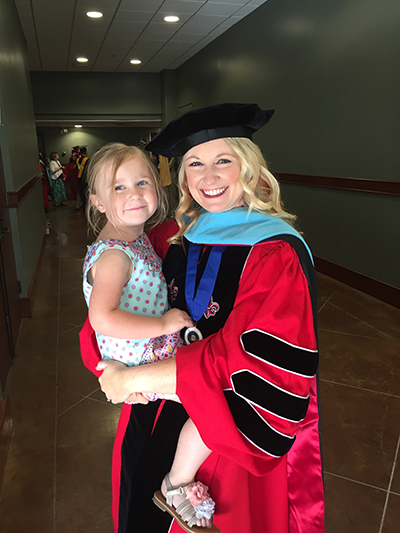 She focused on educational policy and learned a range of education leadership styles and how they affect classrooms, schools, school districts, and legislation. She hails from Pineville, LA, and she now works as a Federal Programs Instructional Coordinator in the Rapides Parish School District. Erin is working now to implement the research findings from the dissertation she completed in the UL Lafayette Educational Leadership Ed.D. program.

While she was earning her education leadership degree, she studied reform movements in schools and the factors that made them successful (or, in other cases, unsuccessful). When she started the doctoral program, Louisiana was working to implement major changes in standards and accountability measures.

“I know that, without reform, our educational systems will never grow and improve,” she says. “However, I saw some schools thrive under the pressure of reform, and I saw other schools struggle with the changes. When implemented poorly, reform often costs districts inordinate amounts of time, money, and even personnel. I wanted to know, according to research, why reform is successful in some schools but not others. I wondered, ‘Why do some schools absorb change better than others? What can we do to prepare all types of schools for change?’”

Her research led her to study the relationships and impact of school culture, school climate, education leadership styles, teacher efficacy, and collective efficacy on reform movements in schools.

“I knew from reading the literature on these constructs that they were somehow connected to each other and to reform, but I wanted to see the nature of the relationships. I found that although the constructs are related to reform, some are more strongly correlated with reform than others.

To help school districts determine which schools are most prepared to implement and sustain a reform movement, she created the Reform Readiness Survey (RRS), which addressed culture, climate, efficacy, and education leadership styles.

With the support of her superintendent, she distributed the survey to all teachers in her district and collected more than 1,000 responses. She presented her findings to the school district administration, and her research helped the school district determine which schools were prepared to pilot a new school district initiative called SCALE (Student Centered Academic Learning Environment) Up.

“I knew that reform itself was not the key to increase student achievement,” she recalls. “However, the previously mentioned constructs—school culture, school climate, teacher efficacy, and collective efficacy—have all been shown to improve student achievement. I began to make connections in the literature and then with my own data. I think my most exciting moment was when I was sitting on a bed, charts and data spread around me, typing my major constructs. I had no idea how successful the study would be at the time. I was hungry for answers and intrigued by the constructs.”

Of the 51 schools in the Rapides Parish School District, nine schools were selected using a rubric that included Louisiana Department of Education criteria and each school’s score on the Reform Readiness Survey. Dr. Stokes says she hopes more districts will use the RRS in the future to help implement successful reform in stages.

Dr. Stokes was able to work closely with the Rapides Parish School District to conduct her research because she was working there full time while earning her education leadership doctoral degree. In fact, the proximity to her work was one of the reasons she chose UL Lafayette’s education leadership program, along with learning from seasoned educators and researchers face-to-face.

“I felt like I could make a difference for public schools if I had more knowledge and more doors would be opened for me with a doctorate,” she says. “I am very passionate about the public school system, and I felt like I would have more opportunities to advocate for our children and other stakeholders with this degree.”

In addition to working on her research and dissertation, she also gained education leadership skills through her classes. Her favorite class, she says, was about the politics of education that convened in the State Capitol and the Department of Education in Baton Rouge. She also presented and attended research conferences including the Louisiana Educational Research Association conference and the Mid-South Educational Research Association conference.

“Looking back, I see how incredible the professors are—in both research and practice,” she recalls. “I still feel like I can call them if I need anything. If I had to do it all over again, with the choice of going to any university, I would still choose UL Lafayette.”

“Outside of the incredible learning experiences in the classroom and out of the classroom, my favorite part of the experience is the relationships that I formed with my professors and my colleagues,” she adds. “I left the program with life-long friends of whom I had never previously met.”

Since graduating, Erin has collaborated with educational leadership professor and mentor Dr. Dianne Olivier on research, started a blog about working in a public school system, and owns a consulting firm with two other members of her cohort.

Learn more about the doctorate in educational leadership program >